Falling Into The Abyss by Mai Lê 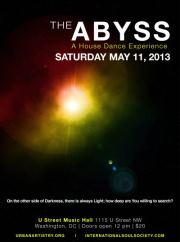 In 2012, I entered a House Dance Competition at International Soul Society Festival organized in Washington DC by Urban Artistry called The Abyss. Why was it called the "Abyss"?
Probably because unlike traditional House battles, here, the selected dancers go hard for an hour straight in the cypher. So depending on where you come from, mentally, I mean, maybe geographically too (HA!), you could think of it as a harder challenge (1 hour vs 2 minutes) or as a rather natural experience (same as cyphering in the club). My past experience made me opt for the latter, but at the end of the day I didn't really know what to expect.

After participating in my first Abyss cypher in DC, I concluded that it wasn't as natural as I thought it'd be- probably due to the competition context (money at stake, judges' eyes, the thought of time management, etc.), but it definitely was the closest to the "real deal" in the sense that the cypher helps build an organic vibe among its dancers, true to its clubbing roots.

I may be wrong but I think we were all a little reserved when we did that first Abyss. We were half creating, half observing and understanding the dynamics of this "official competition cypher". Looking back at it, the reservation wasn't justified, we just had to go hard and that's all we should have thought about!

Lesson learned as the ISSF organizers come to Oakland to host an Abyss Qualifier at the Oakland House Dance Conference 2013. This time- no judges, the top 12 dancers (as opposed to top 8 the first time) still dance for an hour straight, but then they have to vote for who they think the best dancer of the cypher was. The winner then is flown to DC for the International Soul Society Festival for The Abyss 2013 finals, where he/she has the opportunity to win the grand prize.

In the Oakland Qualifier, I didn't enter for the win. I was honored to participate in The Abyss as a "wild card" - basically a dancer that jumps in the cypher for a short time just to spice it up! 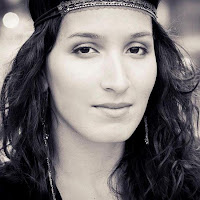 To be honest, this Oakland cypher didn't even need to get spiced up (HA!), those 12 dancers were hungry and going hard from beginning to end! The music was definitely helping (props to DJ Tomahawk Bang on the wheels with the bomb track selection). I felt the dancers covered more range too (floor work, animalistic style, aggressive flow, very smooth gracious flow, etc). The cypher was very intense, in a positive way, and was clearly entertaining the whole room.
When the time came for the dancers to vote, two dancers stood out, they each had three votes so they had to "battle" for an additional half hour to determine who was the cypher warrior of the day. Maaaan o maaaan, I have the biggest respect for these two! Angelo and Odie gave their heart to the floor. The crowd was super encouraging, so much so that we all got some of their sweat on our faces as a thank you ;)) Odie went home with the W.  Congrats again to him!

In conclusion (because I'm trying to make this short, but I see it becoming a book-HA!), my first Abyss experience was a dope one, but my Oakland Abyss experience was an even a doper one.  I just hope that future, "Abysses" follow that exponential growth trajectory! This cypher is not only inspiring for its dance but actually rather for its vibe and energy. It is a real, raw and memorable experience to all of us and on our paths in this House culture journey, I wish us all many more!